The Arrival of Spring and 2013 Iowa Hail Storm Statistics

The Arrival of Spring and 2013 Iowa Hail Storm Statistics

Now that winter has melted away, spring has finally sprung and with it comes its own version of severe and damaging weather conditions. These conditions, especially hail, can be threatening to your Des Moines-area home’s exterior, vehicles and other personal property. 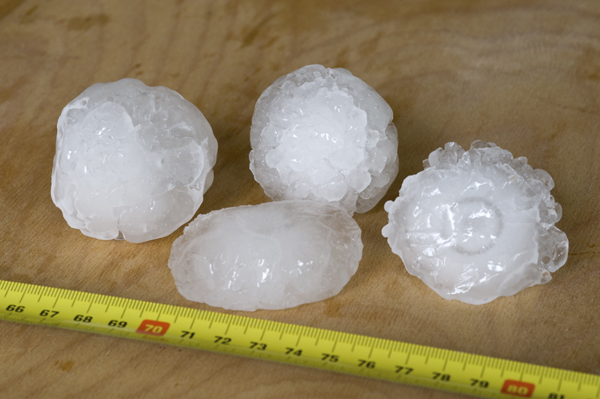 Sometimes, if you don’t notice, inspect, or repair damage after severe weather such as Iowa hail storms occur, it could eventually lead into other issues. At VanWeelden Co., we are familiar and experienced with the effects of Iowa’s ever-changing weather, as well as delivering proven remodeling solutions should the need arise.

According to the National Oceanic and Atmospheric Administration (NOAA), there were a total of 45 hail events in Iowa during 2013, with the size of hailstones ranging from three-fourths of an inch to three inches in diameter! The largest recorded for 2013 was in the city of Carbon, part of Adams County, just southwest of the Des Moines-area.

For the sake of comparison, a three-inch hailstone is about the same size as small orange. Imagine the amount of damage hail of this size could cause, not to mention the cost. According to WeatherPrediction.com, “Once hail gets over one inch then the damage to cars, windows and roofs and structures goes up significantly.”

The damage hail can do is also increased depending on wind speed, even for hail under one inch. Of the 45 recorded hail events in Iowa last year, 65 percent of the storms happened in Polk and the surrounding counties of Boone, Dallas Madison, Warren and Story. The cost associated with the damage from these storms was significant, standing at $48,000 in Polk County alone, and $200,000 for a six-county region in Central Iowa.

The entire state wound up with damages totaling nearly $1.5 million. We’ve already had a few incidences of hail this year in Des Moines and surrounding areas. The Des Moines Register reported on April 12 that a storm had moved through Iowa with high wind gusts and large hail, with other reports near Story County of hail measuring three-fourths inches in diameter. Alongside hail events is the ever-looming tornado season.

In 2013, Iowa saw 28 tornadoes, which is below the 30-year average of 47, but inflicted significant damage at a cost of $5.3 million and included one twister coming in at an F4 on the Fujita scale.

Don’t let the severe Iowa weather catch you off guard. Make sure to keep your family safe during severe weather, and check for any storm damage once it’s passed. If you do find your Des Moines-area home’s roof or siding has been damaged from hail or alternative types of severe weather, don’t hesitate to contact the trusted and experienced team at VanWeelden Co. for an estimate or free consultation.