Home/Roofing/Future Miracles: Step off the Sidelines for Iowa’s Special Needs Kids
Previous Next

The Miracle League and its donors believe every child deserves the chance to play in an organized sport. Support the Ankeny Miracle League Ball Field to ensure Central Iowans with unique challenges can maneuver around an accessible playground with ease. 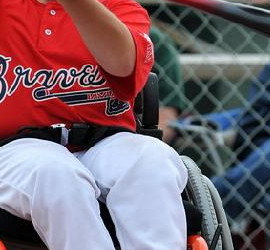 The generosity of residents, businesses and nonprofits in and around Greater Des Moines is pushing the Ankeny Kiwanis Miracle League one run closer to its goal of developing an all-inclusive park and baseball field focused on special needs kids.

Many including John Deere Des Moines Works and Karl Chevrolet have stepped to the plate in support of the Miracle League Ball Field under construction at Ankeny’s Hawkeye Park, which is ideally located to serve all of Central Iowa.

City of Ankeny Recreation Supervisor Ryan Penning says the new facility located in one of the town’s 43 parks will be the first among them to include a “truly accessible” playground and ball field.

Similar to the timely care and maintenance required to get the most millage out of a new roof or other exterior home improvement projects, nonprofits such as the Miracle League rely on the ongoing support of donors and volunteers to keep going strong. Penning hopes those in Ankeny and other Iowa communities will recognize the effort by pledging tax-deductible or in-kind donations both now and in the future.

“Fundraising efforts will continue even when construction has completed,” he says. “An endowment fund will be created that can provide financial relief to the operating costs of the Miracle League program, annual maintenance costs, and future enhancements of the ball field or playground.”

The park, when completed, will also allow for the accommodation of a baseball/softball program for youth, both with and without special needs at the same time and in the same location.

“The motto that the Miracle League uses is ‘Every Child Deserves a Chance to Play Baseball,’” Penning says. “It’s been neat to witness first-hand how the business community really steps up when a great initiative is announced. It’s one thing to hear about the project and all the great stories that come from it, but it’s another thing to actually witness it.”

VanWeelden Co. got involved because from Clive, to Johnston, to West Des Moines, Ankeny and cities across the state, we believe in supporting initiatives that provide long-lasting value to homeowners, residents and families in Iowa communities.

The Ankeny Miracle League Ball Field project, which Penning says was made possible at least in part via a public-private partnership, has received strong support in Ankeny. Now other metro area businesses and residents have an opportunity to step off the sidelines and realize a solid return on their investment: